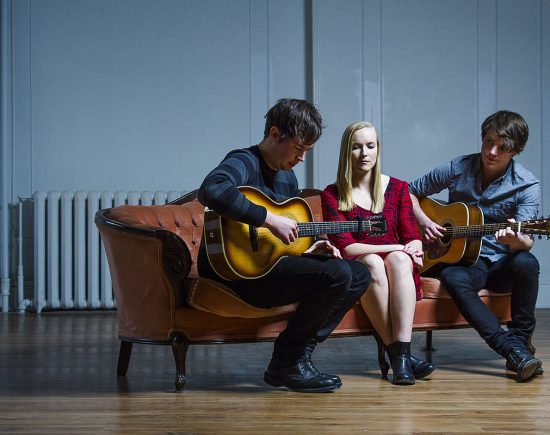 Carleton Stone, Breagh Mackinnon and Dylan Guthro pose for a photo at the Carleton earlier this week.

For a musician, there’s nothing like being on the road with your friends.

Especially when your friends are artists you used to be in competition with, said local musician Carleton Stone of Dylan Guthro and Breagh Mackinnon.

“There’s a lot of singer-songwriters, especially in this community. We were kind of doing our own thing but also competing against each other,” said Stone, sipping beers with Guthro and Mackinnon in the back room of the Carleton Music Bar and Grill in Halifax.

“We just thought, there’s such a great chemistry between us, why not try to join forces and do something that’s bigger that any of us could do on our own?”

Stone, Guthro and Mackinnon are putting their solo careers on the back-burner and forming the band Port Cities.

Although all three have found success on their own, it wasn’t a hard decision to leave that behind, said the 23-year-old Guthro.

All three have played in each others bands, they’ve written songs together and they are longtime friends.

“We were on stage singing Carleton’s ‘Blood Is Thicker Than Water,’ and the three-part harmony blend felt really natural and really cool, and that kind of sparked the idea,” said Guthro, a jack-of-all-trades artist who plays a number of instruments and crosses multiple genres.

Guthro’s song “Do It All Again” was produced by Classified and last summer, he teamed up with local rapper Quake Matthews for the infectious “Summertime Win.”

“The show is sort of a mix of our three sounds, but coming together with these songs that we all wrote together so there’s that common thread,” said Mackinnon, whose has earned Music Nova Scotia and East Coast Music Awards nominations for her music.

But all three will be sharing the role of singer, often blending their voices for two and three-part harmonies.

“It’s nice to have two of your best buds to share the weight of being on the road with, because there’s so many not so cool things about being a traveling musician,” said Stone, an award-winning musician whose song “Climbing Up The Walls” has been a mainstay on local radio airwaves.

The band has been recording in Cape Breton with the group’s mentor and producer Gordie Sampson.

Later this year, they’ll head to Nashville for more recording, with the hopes of releasing a single this spring.

“I feel like (Sampson) is capturing the three characters that we bring to the table and making it one thing — Port Cities,” said Guthro.