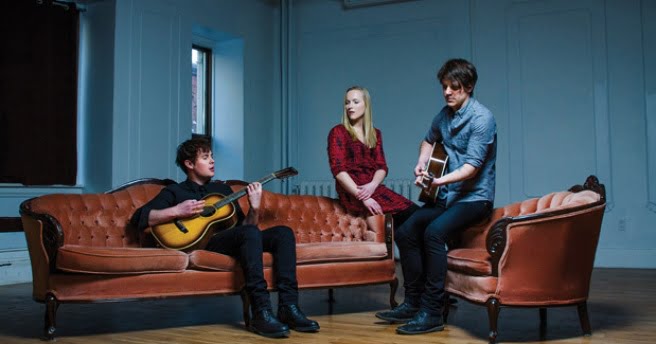 Nova Scotia’s diverse music scene is filled with a dynamic mix of genres. From the sound of the fiddle, to folk inspired melodies, and on to the vibrant hip-hop scene, the province inspires many performers to root themselves here musically. It’s no surprise that Halifax’s latest emerging trio, Port Cities, consists of three of the province’s top singer/songwriters. Breagh MacKinnon, Carleton Stone and Dylan Guthro each bring a distinctive approach to the band’s music, which is reflected in their lyrically charged first single, “Sound of Your Voice”.

Sound of Your Voice was produced by Grammy Award Winner and Cape Bretoner Gordie Sampson, who runs a song camp for young musicians every summer in Ingonish. “One of the benefits of the song camp is that it introduces songwriters to each other that might not have normally had a chance to meet,” Sampson explains. “Port Cities is the ultimate example of this. The way their strengths integrate both as writers and performers is the rare stuff that makes great bands truly great.”

Q: You guys are all friends. Was that cultivated at Gordie’s Song Camp in Cape Breton?

Carleton Stone: I was part of Gordie Sampson’s song camp right from the first year in 2010. I got in at the cut-off age when I was 25. It was the same year that Mo Kenney and Molly Thomason were there. Dylan and Breagh came the following year. The process of all of us connecting and forming this trio seemed to happen really organically.

Q: You have all built established careers working with the likes of successful musicians like Classified, Tegan and Sara, Feist and David Myles. Who initiated the onset of forming “Port Cities”?

Breagh: Dylan did some stuff with Classified. I worked with David Myles, and Carleton had just finished his last record, which Dylan had recorded on. It just felt like a natural progression to where we are now. There was no real set plan.

Dylan: It was one night after a show we all just started jamming together to Carleton’s song, “Blood is Thicker Than water”. The harmonies and the blends just felt right. I thought, “We already perform in each other’s bands and we always hang out. We should just have one car, play one show and have one name.” We all wanted to do this.

Breagh: That is what spurred it on. The next day we were, like, “Are we actually going to do this?” After talking to Gordie who was really looking to sink his teeth into something new, we collectively decided to make it a priority and combine forces to collaborate on one project together, which is making this record.

Q: Gordie Sampson played an integral role in the inception of “Port Cities”, and he is producing the new album. You seem to all have a great rapport with him. Why do you think that is?

Carleton: Gordie has really led by example since the very beginning of our relationship with him. A lot of senior, national or L.A. songwriters are very protective of what they have. They see young people coming up and they don’t want to help them out. Gordie is the exact opposite. He has a very generous attitude with his creativity, which has trickled down to all of us. That just really helps because ego is the enemy of songwriting.

Q: The name Port Cities is certainly reflective of living here. Where was the name derived from?

Breagh: We had been back and forth on a bunch of names for a long time. I think I just threw it out one night at our manager Sheri’s place. She loved it right away and registered the domain name that night.

Q: The sound of Port cities is a real mix of genres; do you each draw from different influences? How would you define your sound?

Breagh: We all come from different places musically, and we all have very different influences. Dylan is into hip-hop; I am into Jazz. Carelton is focused on songwriting. We can take all these pieces of the genres were interested in and combine them with our shared interests, writing great songs.

Carelton: We all walk on the same stage every night and sing songs that were all really proud of, whether we wrote them together or with outside collaborators. Behind the scenes in our own cars, or our headphones we listen to different music, but we appreciate what each of us listens to. That keeps it exciting.